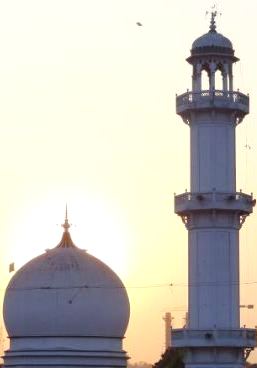 TO BE INTRODUCED IN LOK SABHA

A BILL to protect the rights of married Muslim women and to prohibit divorce by pronouncing talaq by their husbands and to provide for matters connected therewith or incidental thereto.

BE it enacted by Parliament in the Sixty-eighth Year of the Republic of India as follows:—

1. (1) This Act may be called the Muslim Women (Protection of Rights on Marriage)
Act, 2017.
(2) It shall extend to the whole of India except the State of Jammu and Kashmir.
(3) It shall come into force on such date as the Central Government may, by notification in the Official Gazette, appoint.

2. In this Act, unless the context otherwise requires,—

(a) “electronic form” shall have the same meaning as assigned to it in clause (r)
of sub-section (1) of section 2 of the Information Technology Act, 2000;

(b) “talaq” means talaq-e-biddat or any other similar form of talaq having the effect of instantaneous and irrevocable divorce pronounced by a Muslim husband; and

(c) “Magistrate” means a Magistrate of the First Class exercising jurisdiction under the Code of Criminal Procedure, 1973, in the area where a married Muslim woman resides.

CHAPTER II
DECLARATION OF TALAQ TO BE VOID AND ILLEGAL

3. Any pronouncement of talaq by a person upon his wife, by words, either spoken
or written or in electronic form or in any other manner whatsoever, shall be void and illegal.

4. Whoever pronounces talaq referred to in section 3 upon his wife shall be punished
with imprisonment for a term which may extend to three years and fine.

5. Without prejudice to the generality of the provisions contained in any other law for the time being in force, a married Muslim woman upon whom talaq is pronounced, shall be entitled to receive from her husband such amount of subsistence allowance for her and dependent children as may be determined by the Magistrate.

6. Notwithstanding anything contained in any other law for the time being in force, a married Muslim woman shall be entitled to custody of her minor children in the event of pronouncement of talaq by her husband, in such manner as may be determined by the Magistrate.

7. Notwithstanding anything contained in the Code of Criminal Procedure, 1973, an offence punishable under this Act shall be cognizable and non-bailable within the meaning of the said Code

STATEMENT OF OBJECTS AND REASONS

The Supreme Court in the matter of Shayara Bano Vs. Union of India and others and other connected matters, on 22nd August, 2017, in a majority judgement of 3:2, set aside the practice of talaq-e-biddat (three pronouncements of talaq, at one and the same time) practiced by certain Muslim husbands to divorce their wives. This judgement gave a boost to liberate Indian Muslim women from the age-old practice of capricious and whimsical method of divorce, by some Muslim men, leaving no room for reconciliation.

2.The petitioner in the above said case challenged, inter alia, talaq-e-biddat on the ground that the said practice is discriminatory and against dignity of women. The judgement vindicated the position taken by the Government that talaq-e-biddat is against constitutional morality, dignity of women and the principles of gender equality, as also against gender equity guaranteed under the Constitution. The All India Muslim Personal Law Board (AIMPLB), which was the 7th respondent in the above case, in their affidavit, inter alia, contended that it was not for the judiciary to decide matters of religious practices such as talaq-e-biddat, but for the legislature to make any law on  the same. They had also submitted in the Supreme Court that they would issue advisories to the members of the community against this practice.

4. In order to prevent the continued harassment being meted out to the hapless married Muslim women due to talaq-e-biddat, urgent suitable legislation is necessary to give some relief to them. The Bill proposes to declare pronouncement of talaq-e-biddat by Muslim husbands void and illegal in view of the Supreme Court verdict. Further, the illegal act of pronouncing talaq-e-biddat shall be a punishable offence. This is essential to prevent this form of divorce, wherein the wife does not have any say in severing the marital relationship. It is also proposed to provide for matters such as subsistence allowance from the husband for the livelihood and daily supporting needs of the wife, in the event of husband pronouncing talaq-e-biddat, and, also of the dependent children. The wife would also be entitled to custody of minor children.

5. The legislation would help in ensuring the larger Constitutional goals of gender justice and gender equality of married Muslim women and help subserve their fundamental rights of non-discrimination and empowerment.

6. The Bill seeks to achieve the above objects.