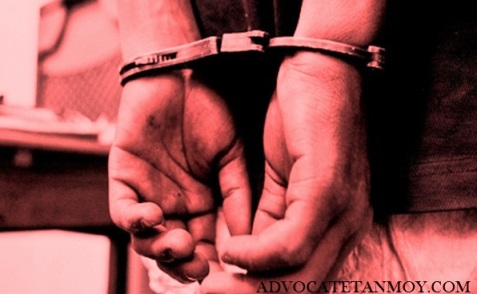 STATISTICS:- A total of 894 deaths in judicial custody and 74 deaths in police custody have been recorded in India in 2017.

CUSTODIAL violence, including torture and DEATH in the lock-ups, strikes a blow at the rule of law, which demands that the powers of the executive should not only be derived from law but also that the same should be limited by law. CUSTODIAL violence is a matter of concern. It is aggravated by the fact that it is committed by persons who are supposed to be the protectors of the citizens. It is committed under the shield of uniform and authority in the four walls of a police station or lock-up, the victim being totally helpless. The protection of an individual from torture and abuse by the police and other law-enforcing officers is a matter of deep concern in a free society.

In spite of the constitutional and statutory provisions aimed at safeguarding the personal liberty and life of a citizen, growing incidence of torture and DEATHs in police custody has been a disturbing factor. Experience shows that worst violations of human rights take place during the course of investigation, when the police with a view to secure evidence or confession often resorts to third-degree methods including torture and adopts techniques of screening arrest by either not recording the arrest or describing the deprivation of liberty merely as a prolonged interrogation. A reading of the morning newspapers almost everyday carrying reports of dehumanising torture, assault, rape and DEATH in custody of police or other governmental agencies is indeed depressing. The increasing incidence of torture and DEATH in custody has assumed such alarming proportions that it is affecting the credibility of the rule of law and the administration of criminal justice system. The community rightly feels perturbed. Society’s cry for justice becomes louder.

CUSTODIAL DEATH is perhaps one of the worst crimes in a civilized society governed by the rule of law. The rights inherent in Articles 21 and 22(1) of the Constitution require to be jealously and scrupulously protected. We cannot wish away the problem. Any form of torture or cruel, inhuman or degrading treatment would fall within the inhibition of Article 21 of the Constitution, whether it occurs during investigation, interrogation or otherwise. If the functionaries of the Government become law-breakers, it is bound to breed contempt for law and would encourage lawlessness and every man would have the tendency to become law unto himself thereby leading to anarchism. No civilized nation can permit that to happen. Does a citizen shed off his fundamental right to life, the moment a policeman arrests him? Can the right to life of a citizen be put in abeyance on his arrest? These questions touch the spinal cord of human rights’ jurisprudence. The answer, indeed, has to be an emphatic `No’….

Nature of Evidence: In State of M.P. v. Shyamsunder Trivedi and Ors., (1995) 4 SCC 262 wherein it has been held that in a case of CUSTODIAL DEATH or police torture, generally ocular or other direct evidence is not available and the police officials alone can explain the circumstances in which a person in their custody died.

Article 22. Protection against arrest and detention in certain cases.- (1) No person who is arrested shall be detained in custody without being informed, as soon as may be, of the grounds for such arrest nor shall he be denied the right to consult, and to be defended by, a legal practitioner of his choice.
(2) Every person who is arrested and detained in custody shall be produced before the nearest magistrate within a period of twenty-four hours of such arrest excluding the time necessary for the journey from the place of arrest to the court of the magistrate and no such person shall be detained in custody beyond the said period without the authority of a magistrate.
(3) Nothing in clauses (1) and (2) shall apply –
(a) to any person who for the time being is an enemy alien; or
(b) to any person who is arrested or detained under any law providing for preventive detention.
(4) No law providing for preventive detention shall authorise the detention of a person for a longer period than three months unless –
(a) an Advisory Board consisting of persons who are, or have been, or are qualified to be appointed as, Judges of a High Court has reported before the expiration of the said period of three months that there is in its opinion sufficient cause for such detention:
Provided that nothing in this sub – clause shall authorise the detention of any person beyond the maximum period prescribed by any law made by Parliament under sub – clause (b) of clause (7); or
(b) such person is detained in accordance with the provisions of any law made by Parliament under sub – clause (a) and (b) of clause (7).

(5) When any person is detained in pursuance of an order made under any law providing for preventivedetention, the authority making the order shall, as soon as may be, communicate to such person the grounds on which the order has been made and shall afford him the earliest opportunity of making a representation against the order.
(6) Nothing in clause (5) shall require the authority making any such order as is referred to in that clause to disclose facts which such authority considers to be against the public interest to disclose.
(7) Parliament may by law prescribe –
(a)The circumstances under which, and the class or classes of cases in which, a person may be detained for a period longer than three months under any law providing for preventive detention without obtaining the opinion of an Advisory Board in accordance with the provisions of sub-clause (a) of clause (4);
(b) the maximum period for which any person may in any class or classes of cases be detained under any law providing for preventive detention; and
(c) the procedure to be followed by an Advisory Board in an inquiry under sub-clause (a) of clause (4).

We are conscious that there is a rise in incidents of CUSTODIAL DEATHs but we cannot completely dehorns the evidence and its admissibility according to law convict the accused. We cannot act on presumption merely on a strong suspicion or assumption and presumption. We can only draw presumption which is permissible under the law and we cannot rush to the conclusion just because the deceased has died in the police custody without there being any proper link with the commission of the crime.