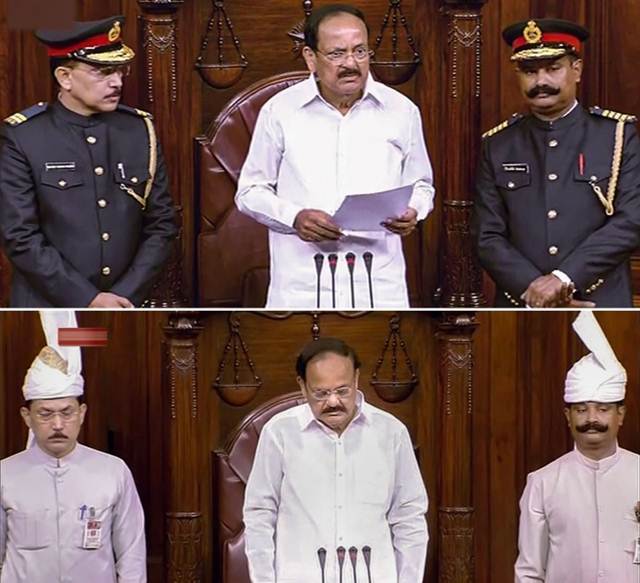 In the case of grave disorder arising in the Council, the Chairman may, if he thinks it necessary to do so, adjourn the Council or suspend any sitting for a time to be named by him.

First day of historic 250th session of Rajya Sabha saw a visible change with marshals standing beside the seat of the Chairman in House wearing a military-style uniform.

Trump: United States President Donald Trump on Monday said that he will “strongly consider” the idea of him testifying before the Congress in his impeachment inquiry over his dealings with Ukraine, though he described the whole process as a “witch hunt”.

Lok Sabha: On the first day of the winter session of the lower house in parliament opposition members on Monday termed the National Conference leader’s detention as illegal and demanded that he be allowed to attend the House.

Rajya Sabha: In a departure from convention, the Rajya Sabha on Monday allowed leaders of various political parties to speak and pay tributes to five late members, including former finance minister Arun Jaitley, instead of just the Chairman making obituary references.

Pakistan: Former minister finance minister Asad Umar will make a return to the federal cabinet as the minister for planning and special initiatives, the government chief spokesperson Firdous Ashiq Awan announced on Monday.

Agra: Uttar Pradesh government was planning to rename Agra after a committee was set up to examine if the city was known by any other name in ancient times. Bhim Rao Ambedkar University Vice-Chancellor Arvind Dixit said a committee had been constituted to look into the issue after it received a notice from the Agra administration.

BMC: Shiv Sena is set to retain control over the Brihanmumbai Municipal Corporation (BMC) after the Bharatiya Janata Party dropped out of the race because it does not have the numbers. Shiv Sena’s Kishori Pednekar, 56, and Suhas Wadkar, 44, are the only ones to file nominations for elections to the post of Mayor and Deputy Mayor, respectively. The election was scheduled to be held on November 22.

Brothel: A fast track court in West Bengal’s East Midnapur district has sentenced three men to jail for three years for visiting a brothel under the Immoral Trafficking (Prevention) Act, which anti-human trafficking activists said was probably first such conviction in India.

RBI: Finance Minister Nirmala Sitharaman on Monday said transfer of surplus reserves from the Reserve Bank of India (RBI) to the government in future will depend on net income and other financial parameters of the central bank besides the recommendations of the expert committee on excess capital. The surplus distribution policy of RBI is determined in accordance with section 47 of the RBI Act, 1934, Sitharaman said in a written reply to Lok Sabha.

SEBI: The Supreme Court on Monday stayed an order of the Securities Appellate Tribunal (SAT) which had held that markets’ watchdog SEBI does not have the power to bar auditors. A bench comprising Justices Arun Mishra and Indira Banerjee also issued notice on the appeal filed by the Securities and Exchange Board of India (SEBI) against the SAT’s September 9 order.