The Permanent Foundations Service to Historical Artifacts and Environment Association, an NGO had filed a petition at the Council of State seeking annulment of the decision to convert Hagia Sophia into a museum after being a mosque for nearly 500 years.

After that Turkish Supreme Court, struck down the 1934 Cabinet decree on 10th July 2020, which turned Istanbul’s Hagia Sophia into a museum (under Mustafa Kemal Atatürk; 1881-1938), paving the way for its use again as a mosque after an 85-year hiatus. The decision said that in its title deed, Hagia Sophia was defined as a “mosque” and this cannot be legally changed.

Turkish President Erdogan(Justice and Development Party (AKP) made his announcement just an hour after the court ruling was revealed, brushing aside international warnings not to change the status of the monument.

“The decision was taken to hand over the management of the Ayasofya Mosque…to the Religious Affairs Directorate and open it for worship.”

After the court order, the President signed a Decree as given below- 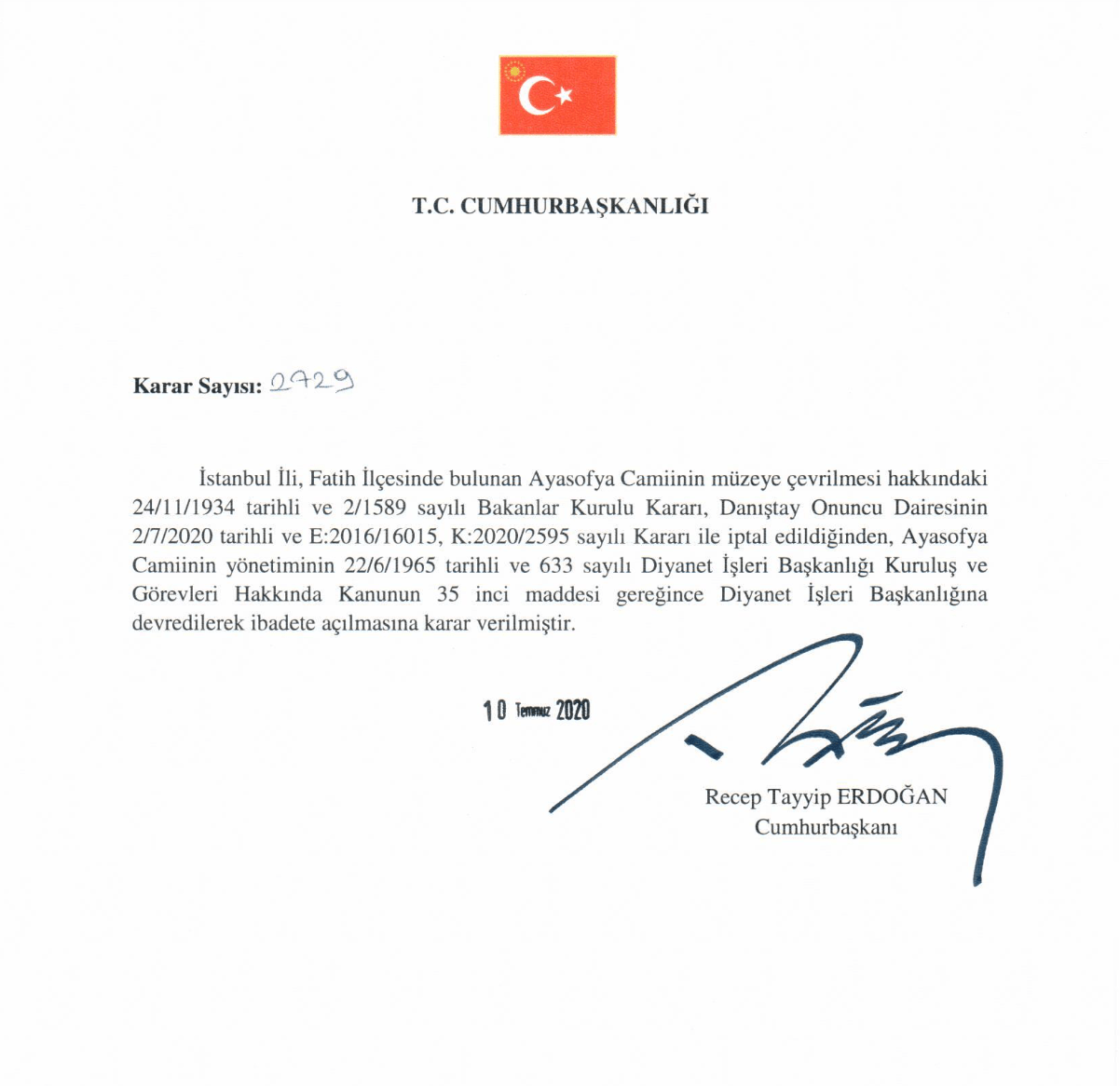 Under the Byzantine Empire, Hagia Sophia had been used as a church for 916 years. In 1453, after the Ottoman Empire conquered Istanbul, it was converted into a mosque by Sultan Mehmet II, also known as the Conqueror. Hagia Sophia underwent restoration work during the Ottoman era, including the addition of minarets for the call to prayer by famed architect Mimar Sinan. Under the Turkish Republic, in 1935 it became a museum. 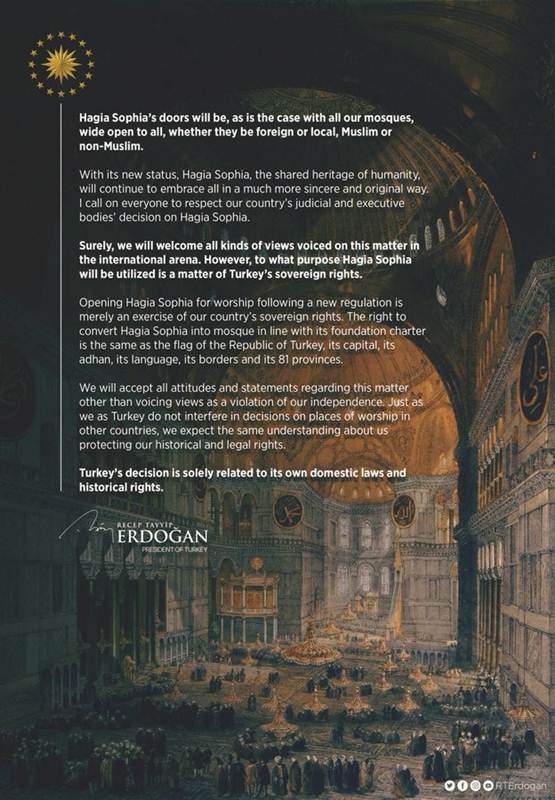 President Recep Tayyip Erdogan signed the decree following years of campaigning by a cultural association, and the decision earlier in the day by a Turkish court, handing control of the building over to the nation’s religious directorate, according to news reports, allowing it to reopen for worship as a mosque.

Hagia Sophia, is part of the “Historic Areas of Istanbul”, and officially inscribed on the World Heritage List as a museum.

“This inscription entails a number of legal commitments and obligations. Thus, a State must ensure that no modification is made to the outstanding universal value of the property inscribed on its territory”, said the UN’s Educational, Scientific, and Cultural Organization.

No modification ‘without prior notification’

“Any modification requires prior notification by the State concerned to UNESCO and then, if necessary, examination by the World Heritage Committee.”

“Outstanding universal value” is the basis for the decision to inscribe any property on the World Heritage List, the statement continued.

“The texts adopted by the Committee specify that the ‘Historic Areas of Istanbul’ is inscribed notably for ‘its unique integration of architectural masterpieces reflecting the meeting of Europe and Asia over several centuries’ and because ‘Hagia Sophia became a model for an entire family of churches and later mosques, and the mosaics of the palaces and churches of Constantinople, influenced both Eastern and Western art’”.

The agency noted that in line with its designation, the Hagia Sophia “has a strong symbolic, historical and universal value.”

UNESCO called upon the Turkish authorities “to initiate dialogue without delay, in order to prevent any detrimental effect on the universal value of this exceptional heritage, the state of conservation of which will be examined by the World Heritage Committee at its next session.”

“It is important to avoid any implementing measure, without prior discussion with UNESCO, that would affect physical access to the site, the structure of the buildings, the site’s moveable property, or the site’s management,” stressed Ernesto Ottone, UNESCO’s Assistant Director-General for Culture. Such measures could constitute breaches of the rules derived from the 1972 World Heritage Convention, the agency warned.

The decision has won praise in the Arab world.

“We congratulate Turkey and ourselves for converting Hagia Sophia back to a mosque because it belongs to all Muslims,” Ekrema Sabri, the preacher of Jerusalem’s Al-Aqsa Mosque, said in a statement.

“We congratulate ourselves, the entire Muslim nation, and particularly the Turkish nation headed by its leader, Recep Tayyip Erdogan, for converting Hagia Sophia back to a house of worship where Allah authorized his name to be raised and mentioned,” he said on Twitter.

The Muslim Brotherhood group described the Turkish decision on Hagia Sophia as a “historic step”.