Ministry of Information and Broadcasting on Wednesday allowed the Sudarshan News channel to broadcast a show on  the “infiltration of Muslims in the Civil Services” after following the Broadcasting rules.

The ministry of information and broadcasting allowed the Sudarshan TV to air their programme on the “infiltration of Muslims in the Civil Services” after receiving representation from the Channel owner.

Earlier the Delhi High Court had restrained Sudarshan TV from telecasting its programme titled ‘Bindas Bol’,  on-air at 8 PM on August 28, whose promo claimed that the channel was all set to broadcast a ‘big expose on conspiracy to infiltrate Muslims in government service’. The plea in High Court was filed through advocate Shadan Farasat which argued that the TV channel’s editor-in-chief Suresh Chavhanke openly indulged in hate speech in the promo against Jamia Milia Islamia students and Muslim community.

But a two-judge bench of the Supreme Court, while hearing a similar plea with the same allegation had refused to put a stay on the same show on Sudarshan channel. This fact was overlooked by the Delhi High Court.  The ruling of Apex court is binding on the Govt of India.

The Government has directed Sudarshan channel to ensure that the show to be telecasted should not violate any programme code. 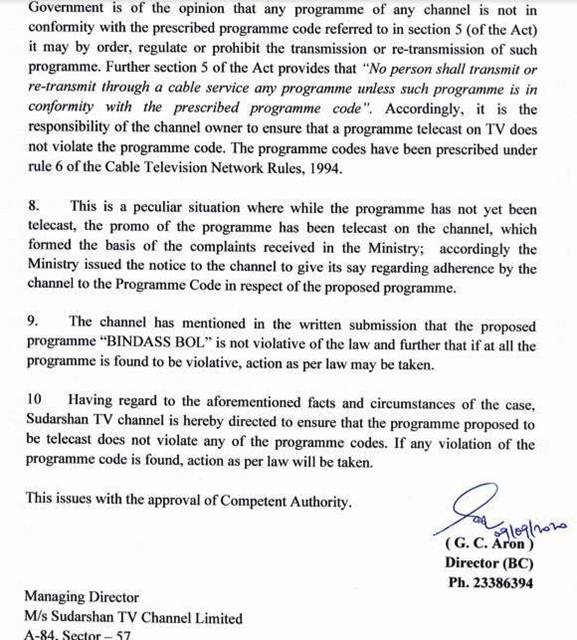 On behalf of Sudarshan News channel following Tweets have been posted.

नौकरशाही जिहाद
Suresh Chavhanke “Sudarshan News” Retweeted
Madhu Purnima Kishwar
@madhukishwar
·
Big relief that attempts to censor
@SureshChavhanke
have failed for the time being.
But they won’t give up so easily.
Quote Tweet