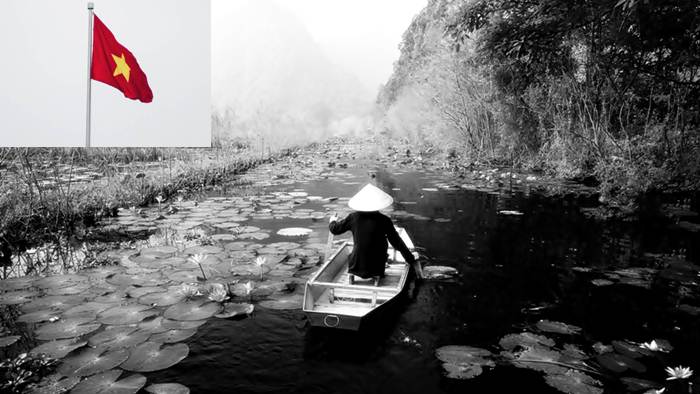 The Socialist Republic of Vietnam is an independent and sovereign country enjoying unity and territorial integrity, including its mainland, islands, territorial waters, and air space.

The land, forests, rivers and lakes, water supplies, wealth lying underground or coming from the sea, the continental shelf and the air, the funds and property invested by the State in enterprises and works in all branches and fields – the economy, culture, society, science, technology, external relations, national defence, security – and all other property determined by law as belonging to the State, come under ownership by the entire people.

The lawful property of individuals and organizations shall not be nationalised and the citizen has the duty to pay taxes and perform public-interest labour according to the provisions of the law.

In the course of their millennia-old history, the Vietnamese people, working diligently, creatively, and fighting courageously to build their country and defend it, have forged a tradition of unity, humanity, uprightness, perseverance and indomitableness for their nation and have created Vietnamese civilization and culture.

Starting in 1930, under the leadership of the Communist Party of Vietnam formed and trained by President Ho Chi Minh, they waged a protracted revolutionary struggle full of hardships and sacrifices, resulting in the triumph of the August Revolution. On 2nd September 1945, President Ho Chi Minh read the Declaration of Independence and the Democratic Republic of Vietnam came into existence. In the following decades, the people of all nationalities in our country conducted an uninterrupted struggle with the precious assistance of friends throughout the world, especially the socialist countries and the neighbouring countries, achieved resounding exploits, the most outstanding ones being the historic Dien Bien Phu and Ho Chi Minh campaigns, defeated the two wars of aggression by the colonialists and the imperialists, liberated the country, reunified the Fatherland, and brought to completion the people’s national democratic revolution. On July 2nd, 1976 the National Assembly of reunified Vietnam decided to change the country’s name to the Socialist Republic of Vietnam; the country entered a period of transition to socialism, strove for national construction, and unyieldingly defended its frontiers while fulfilling its international obligations.

In successive periods of resistance war and national construction, our country adopted the 1946, 1959, and 1980 Constitutions.

Starting in l986, a comprehensive national renewal advocated by the 6th Congress of the Communist Party of Vietnam has achieved very important initial results. The National Assembly has decided to revise the 1980 Constitution in response to the requirements of the new situation and tasks.

This Constitution establishes our political regime, economic system, social and cultural institutions; it deals with our national defence and security, the fundamental rights and duties of the citizen, the structure and principles regarding the organization and activity of State organs; it institutionalises the relationship between the Party as leader, the people as master, and the State as administrator.

In the light of Marxism-Leninism and Ho Chi Minh’s thought, in furtherance of the Program for National Construction in the period of transition to socialism, the Vietnamese people vow to bring into full play the tradition of patriotism, unite millions as one, uphold the spirit of self-reliance and self-improvement in the national construction, pursue a foreign policy of independence, sovereignty, peace, friendship and cooperation with all countries, strictly abide by the Constitution, and win ever greater successes in the cause of renovating, building and defending the Fatherland.