A huge temple of al-Allat( al-Illahat) lies in the Diocletian Camp. She is like Athena or Ester. aL- Allat used to ride on a lion, like goddess Durga. She used to accompany by Manāt and al-ʿUzzā.  She was the protector of the Quraysh tribe(قريش). At the annual pilgrim, the members of Quraysh would circumambulate(الطواف) Kaʿbah while chanting the holy names of the Arabian Trinity. al-Allat the virgin mother of  Dushara was worshipped as a black stone and her symbol was a crescent moon. In Petra (Jordan) she was the mother(Alla-humma) of all gods and divinity.

At the time of Ramadan(رمضان-Nine-month), the al- Allat would visit carrying her pregnancy and reside in the Kabah (Kaabou-cube) from her official residence at Petra, under the care of al- Hubble. The people around the world would come to visit her and circumambulate her by chanting  ‘Labaik Alla-humma labbayk’ (1).  On the first day of the moon, the Mother goddess would give birth of the universe. At this time adult pilgrims should keep fasting and, wear a single white cloth (loving colour of Hubble) and never indulge in sex. 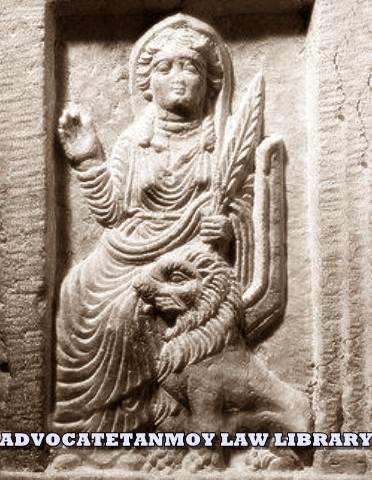