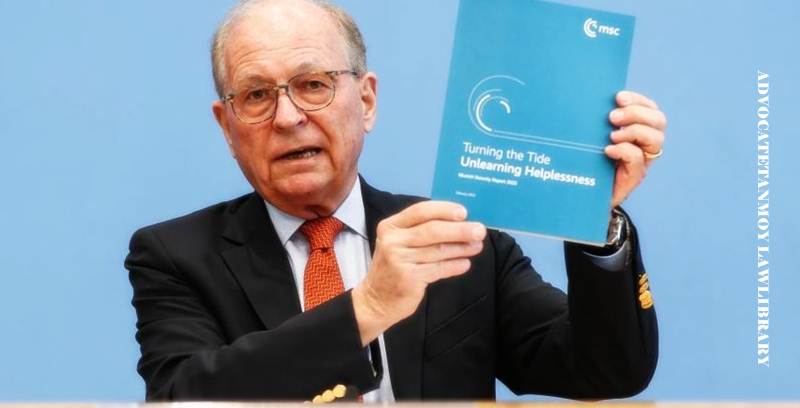 2021 was clearly not a year for geopolitical optimism. Almost every month, a new crisis dominated the news,
contributing to a sense that this mounting tide of crises threatens to overwhelm us.

Against this backdrop, it is not surprising that in Europe and beyond, concern about a growing loss of control is prevalent (Chapter 1). In fact, findings from the Munich Security Index 2022 not only reflect the high level of risk perceived by respondents in the G7 and BRICS countries; they also suggest the emergence of “collective helplessness” in the face of a plethora of crises that reinforce each other. Just like people can suffer from “learned helplessness” – a psychological term describing the feeling that nothing one does can effect positive change – societies, too, may come to believe that they are unable to get a grip on the challenges they are facing. Whether it is the seemingly endless pandemic, the increasingly tangible threat of climate change, the vexing vulnerabilities of an interconnected world, or increasing geopolitical tensions, all these challenges contribute to a feeling of a loss of control. Liberal democracies appear to feel particularly overwhelmed.

This perception is highly dangerous because it can turn into a self-fulfilling prophecy. Societies that have concluded that they cannot solve humankind’s most challenging problems might no longer even try to turn the tide. Will our stressed and overburdened societies end up accepting what they see as their fate, although they have the tools and resources to change it?

Unfortunately, 2021 overall did not alleviate these concerns. With the chaotic withdrawal from Afghanistan, for instance, the past year has also reinvigorated a debate about what international interventions are able to realistically accomplish. In light of the limited achievements of the United States and its partners in Afghanistan (Chapter 2), hard questions arise about the West’s ability to build capable, legitimate state structures and promote stability elsewhere in the world. As Afghanistan now finds itself on the brink of the world’s worst humanitarian crisis, with civil liberties being severely restricted under Taliban rule, the investments of two decades of external intervention are at risk. While the West has ended an “endless war,” people in Afghanistan are looking toward an uncertain future.

The developments in Afghanistan have also spurred a debate on European
engagement in Mali and the Sahel region (Chapter 3). Even though this region
has seen a massive increase in peacebuilding activities since 2013, the
security situation has continuously deteriorated. The Malian government has
been an exceedingly difficult partner for the international community – even
before it entered talks with a Russian mercenary group. And increasing levels
of violence in Mali and neighboring states have made it difficult for external
actors to address the root causes of the problems afflicting the region – among
these are poor development, human rights abuses, and rampant corruption.

The Sahel is not the only conflict region where the headwinds for international
stabilization efforts are growing stronger. After a period of democratization and
hope for regional reconciliation in the Horn of Africa and the Arabian Gulf, a
profound destabilization is now evident (Chapter 4). Since November 2020,
civil war engulfs Ethiopia’s northern Tigray region, causing a large-scale
humanitarian emergency. Because the Red Sea region is a crucial choke point of
international trade, an important security link between the Mediterranean, the
Middle East, and the Indo-Pacific, plus a major hub for extremists, the ripple
effects of escalating conflicts will likely be felt far beyond the region. In that
regard, the situation in the Horn of Africa demonstrates that conflicts around
the world are not waiting for the West to draw its lessons from Afghanistan.

At the same time, rising tensions in the Indo-Pacific and Eastern Europe have also raised another type of fear among the transatlantic partners: that of actual war. Nothing illustrates the renewed focus on territorial defense in the West better than the increasingly tense security situation on NATO’s eastern flank (Chapter 5). In recent months, Moscow has made it abundantly clear that it is looking for a revision of the European security order. As the Russian draft proposals for new security treaties demonstrate, Russia insists on a “sphere of influence” in its neighborhood, effectively limiting the sovereignty of countries like Ukraine. Russia’s rhetorical escalation and military buildup have raised profound security concerns across Europe.

While analysts disagree on what President Vladimir Putin’s specific goals are, the debate about the basic principles of European security – and how to defend them – will only intensify in the coming months, posing difficult political and military questions to European leaders who are forced to take a stand and reconsider their strategic posture.

In addition to the return of very traditional security concerns, the coronavirus pandemic has relentlessly highlighted societies’ vulnerabilities in various policy areas. Among other things, it has unmasked strong dependencies in the supply chains of critical technologies, as well as gaping inequalities and their detrimental effects on global crisis resilience.

Both the pandemic and recent geopolitical power moves have brought
vulnerabilities in the technology sector into focus (Chapter 6). The ongoing
global semiconductor supply bottleneck exemplifies what can happen when
supply chains depend on “single points of failure” and geopolitically fraught
supply sources. Due to the strategic importance of tech supply chains, the risk
to them is only growing in an era of systemic competition. This realization has
spurred a rethink on industrial policy in the US, Europe, and other high-tech
economies. Meanwhile, China has had a head start as its comprehensive
approach to economic planning has long focused on boosting its indigenous
tech sector. However, approaches based on “onshoring,” the shifting of supply
from foreign soil to within national borders, are clearly limited. Accordingly,
the focus for policymakers has shifted to achieving supply chain cooperation
between like-minded partners to collectively become more resilient.

Covid-19 has brutally exposed inequalities that exist within and across states
(Chapter 7). Pandemics are not the only grave threat facing humanity today
that is inseparably tied to global divides. Climate change is, too. These threats
to our health and habitats deepen existing disparities; and they will also defy
successful containment if current levels of inequality persist. As long as the
coronavirus rages on in other parts of the world, no country will be safe from
the Covid-19 pandemic. And if less developed countries lack the resources
to embark on low-carbon pathways, global warming cannot be effectively
limited. It is becoming increasingly clear that improving global resilience
in the face of present and future threats requires renewing social contracts,
both within and between countries. Getting back on track to reach the UN
Sustainable Development Goals would be the first important step.

Despite these and the many other challenges on the agenda of this year’s Munich Security Conference, there is still good reason to believe that “unlearning helplessness” is possible. For this, transatlantic leaders need to revive the optimism and momentum palpable in the early days of the Biden administration and demonstrate that both democracy as a system and alliances based on liberal values can deliver for their states’ citizens and the world at large. Collectively, they have the chance to turn the tide. Individually they risk being swept away.