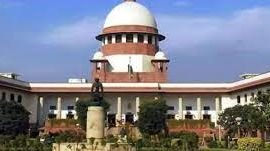 Government of NCT of Delhi Vs. Subhash Jain and Ors.

1. Feeling aggrieved and dissatisfied with the impugned judgment and order passed by the High Court of Delhi at New Delhi in Writ Petition (C) No. 2709 of 2015 by which the High Court has allowed the said writ petition and has declared that the land acquisition proceedings under the Land Acquisition Act, 1894 (hereinafter referred to as “Act, 1894”) with regard to the land in question is deemed to have lapsed under Section 24(2) of the Right to Fair Compensation and Transparency in Land Acquisition, Rehabilitation and Resettlement Act, 2013 (hereinafter referred to as “Act, 2013”), the Government of NCT of Delhi and Anr. have preferred the present appeal.

2. From the impugned judgment and order passed by the High Court, it appears that while declaring that the acquisition proceedings under the Act, 1894 is deemed to have lapsed under Section 24(2) of the Act, 2013, the High Court has heavily relied upon the decision of this Court in the case of Pune Municipal Corporation and Anr. Vs. Harakchand Misirimal Solanki and Ors., (2014) 3 SCC 183.

2.2 In the case of Indore Development Authority Vs. Manoharlal and Ors., (2020) 8 SCC 129, in paragraph 366, the Constitution Bench of this Court has observed and held as under:-

“366. In view of the aforesaid discussion, we answer the questions as under:

366.2. In case the award has been passed within the window period of five years excluding the period covered by an interim order of the court, then proceedings shall continue as provided under Section 24(1)(b) of the 2013 Act under the 1894 Act as if it has not been repealed.

366.4. The expression “paid” in the main part of Section 24(2) of the 2013 Act does not include a deposit of compensation in court. The consequence of non-deposit is provided in the proviso to Section 24(2) in case it has not been deposited with respect to majority of landholdings then all beneficiaries (landowners) as on the date of notification for land acquisition under Section 4 of the 1894 Act shall be entitled to compensation in accordance with the provisions of the 2013 Act.

366.8. The provisions of Section 24(2) providing for a deemed lapse of proceedings are applicable in case authorities have failed due to their inaction to take possession and pay compensation for five years or more before the 2013 Act came into force, in a proceeding for land acquisition pending with the authority concerned as on 1-1-2014. The period of subsistence of interim orders passed by court has to be excluded in the computation of five years.

366.9. Section 24(2) of the 2013 Act does not give rise to new cause of action to question the legality of concluded proceedings of land acquisition. Section 24 applies to a proceeding pending on the date of enforcement of the 2013 Act i.e. 1-1-2014. It does not revive stale and time-barred claims and does not reopen concluded proceedings nor allow landowners to question the legality of mode of taking possession to reopen proceedings or mode of deposit of compensation in the treasury instead of court to invalidate acquisition.”

3. In view of the above and for the reasons stated above, the impugned judgment and order passed by the High Court declaring that the land acquisition proceedings with respect to the land in question has lapsed under Section 24(2) of the Act, 2013 is unsustainable and the same deserves to be quashed and set aside and is accordingly quashed and set aside. Present appeal is accordingly allowed.

4. No costs. Pending application, if any, also stands disposed of.