Revolutionaries : The Other Story of How India Won Its Freedom

Sanjeev Sanyal is a writer, economist and urbanist. He grew up in Kolkata and attended Delhi University before going on to Oxford University as a Rhodes Scholar. He then spent two decades in international financial markets, where he became the managing director and global strategist of Europe’s largest bank. He was named a Young Global Leader by the World Economic Forum in 2010. While living in Singapore, he also took up the study of cities and was awarded the Eisenhower Fellowship for his work on urban dynamics. In 2017, he joined the Indian government as the principal economic adviser. He became a member of Prime Minister Narendra Modi’s economic advisory council in 2022. He has represented India in many international forums, including as co-chair of the Framework Working Group of G20 for five years.

His bestselling books include Land of the Seven Rivers: A Brief History of India’s Geography, The Ocean of Churn: How the Indian Ocean Shaped Human History and Life over Two Beers. [Source HarperCollins Publishers India Pvt. Ltd.]

The freedom movement was not evaluated and placed in front of the youth from the Indian point of view, but history was written by looking through the eyes of the British

Union Home Minister and Minister of Cooperation, Shri Amit Shah released the book – ‘Revolutionaries – The Other Story of How India Won Its Freedom’ in New Delhi on 11 JAN 2023

“We have to remove history from the stream of Extremists vs Moderates and make it realistic, the penance and sacrifice of thousands of people cannot be denied to glorify any one movement”

The freedom movement was successful only on the basis of the patriotism ignited by the armed revolution, if the parallel stream of armed revolution had not run in the country, it would have taken many more decades for the country to become independent

The Union Home Minister started his address by paying tribute to former Prime Minister Shri Lal Bahadur Shastri on his death anniversary. Shri Amit Shah said that only one vision of freedom was always told to us, whereas many individuals, ideas and organizations had valuable contribution in independence of the country. This book is a good attempt to tell the armed freedom struggle to the public.

The Union Home Minister said that it is the responsibility of every generation to read history closely and convey its message to the coming generations in an accurate manner. He said that Prime Minister Narendra Modi talked about Panch Pran on 15th August in the year of Azadi ka Amrit Mahotsav, pride in our heritage and freedom from the signs of slavery is an important part of Panch Pran. Shri Shah said that the country whose present generation does not take pride in its heritage can never make its country great. People who follow the beliefs and thinking of the era of slavery can never free the thinking of the country from slavery. He said that the writing of our history needs to be freed from the thinking of slavery and Veer Savarkar was the first to make this effort. Shri Shah said that the whole country and everyone knew the revolution of 1857 by the name of Gadar, but for the first time Veer Savarkar called the revolution of 1857 as the first freedom struggle and started changing the narrative from there.

Shri Amit Shah said that history gives many beliefs but it cannot be written on the basis of victory and defeat, because efforts also have many aspects. Shri Shah said that History should be written on the basis of reality, evaluation of efforts and analysis of all aspects of efforts and only then history becomes complete in itself. Something similar happened with the history of armed revolution, he said, as many historians continued to suppress these efforts and many others underestimated it. He said that such people do not know that on the day when Shri Bhagat Singh was hanged, no stove was lit in anyone’s house from Lahore to Kanyakumari. The martyrdom of Shri Bhagat Singh  lit the flame of patriotism that never extinguishes in people’s mind. He said that if one has to evaluate the contribution of the entire armed revolution, it cannot be isolated because many people believe that the freedom movement was successful only on the basis of the fire of patriotism ignited by the armed revolution.

The Union Home Minister said if the parallel stream of armed revolution had not run in the country, it would have taken many more decades for the country to become independent. Shri Bankim Chandra Chattopadhyay awakened consciousness in the whole country just by writing Vande Mataram. The entire efforts of the Ghadar Party made tremendous contribution in building and awakening of dormant consciousness in many places across the country. He said that these efforts should have got their due respect in the history but unfortunately they did not get it.  Shri Shah said that after independence, who had the responsibility of writing our history from our point of view and placing it in front of the young children by evaluating from the Indian point of view, committed some mistake. History written from the eyes of British created too much confusion. He expressed confidence that the work of clearing this mist will be done through this book. People say that history has been distorted till date due to various reasons but now nothing can stop us from writing it in the right way. He called upon the students and teachers of history to interpret the pride of the country with their hard work and research without distorting it and create real history and search for 300 such persons who made India a great country.

Shri Amit Shah said that, before and after 1857, the British were never accepted in any corner of this country, the revolutionaries fought for every inch of land, which was the only way to maintain independence. It was a struggle that deserves its due place in history. He said that be it the efforts of many people who selflessly fought for freedom or be it giving the ideal of Swaraj to people through revolution of 1857 after the era of Shivaji Maharaj, all these efforts should get a proper place in the history. The Union Home Minister said that whether it is a non-violent movement or an armed revolution, the foundation of all was in the revolution of 1857 and it is the responsibility of the government as well as the historians to present the true historical facts to the new generation of the country by including all this information.

The Union Home Minister and Minister of Cooperation said that there is a continuity in all the eight chapters of the book and they cannot be read in isolation. Each chapter is linked in a thread with the other chapters. In this book, along with the revolutionaries, their ideals, the interpretation of the thinking of the revolution, their human feelings and the tragedy experienced by them, all have been well strung together like pearls. He said that till date, the history of armed revolution was described as isolated individual effort, but after reading this book, it will be clear that it was not an isolated individual effort, but a collective effort done after a well thought process.

When Bhagat Singh was hanged, no stove was lit in anyone’s house from Lahore to Kanyakumari on that day, the martyrdom of Shri Bhagat Singh lit the flame of patriotism that never extinguishes in people’s mind

Shri Amit Shah said that by reading the 8 chapters of the book as one chapter, the concept of armed revolution will be cleared to us and we will be able to know that the armed revolutionaries were not followers of the path of natural violence but they made violence a medium to fight the British who were equipped with guns and liberate the country. They were also people who followed excellent human values, who were wrongly portrayed and a great injustice was done to them. He said that litterateurs, farmers who created public awareness by shaking the British rule through farmer’s movements and tribal societies spread in every corner of the country had their contribution in getting freedom to the country. Even before 1857, the tribal society fought against the British by taking up arms to not allow their tradition to be polluted. The armed revolutionaries made a heroic effort to liberate the country from the clutches of the British by taking inspiration from patriotism and many incidents around the world.

Shri Amit Shah said that in 1909, Veer Savarkar founded Abhinav Bharat to emphasize the need of its all-India character for the success of armed revolution and after independence he discontinued it because its objective was over. These herculean efforts should not be devalued by naming them isolated efforts. He said that individual patriotism of a person is very great in itself. We have to understand, accept and publicize this effort to liberate the country under one group, one ideology. The Union Minister said that many people sacrificed everything to liberate the country, many times houses were attached, family members were put in jail, many people continued to suffer the punishment in Andaman and Nicobar and even got hanged, these efforts cannot be called personal and failed efforts at all.

Shri Amit Shah said that when Prime Minister Narendra Modi became the Chief Minister of Gujarat, he brought back the ashes of Shri Shyamji Krishna Verma after so many years because Shyamji had said in his will that his ashes should be taken back to India only after the independence of the country. He said that how can anyone call this effort a sporadic effort. Individuals like Shyamji Krishna Verma spread the dream of independence and individuals like Shri Sawarkar worked to make it a reality on the ground. Shri Shah said that all these efforts were neither thoughtless and unorganized nor unsuccessful, these efforts were made on the basis of a well-thought-out ideology and were well united, these efforts have contributed a lot to the success of the movement, which no one can deny.

The Union Home Minister said that we have to remove history from the stream of extremists versus moderates and make it realistic. The penance and sacrifice of thousands of people cannot be denied to glorify any one movement. Shri Shah said that we have to understand that we have not got freedom as a grant, it has been achieved after the sacrifice and bloodshed of lakhs of people. He said that Netaji Subhash Chandra Bose and INA did not get the respect and place they should have got in the history of the country. Today, seeing the statue of Netaji on the ‘Kartavya Path’ gives huge satisfaction. He said that Netaji is that beacon of light who will continue to inspire the youth to become patriots for generations to come.

Shri Amit Shah said that today trends of the youth of the country and the beliefs of the country are changing. He said that we have a long history of people who fought for the country for many years and they were the source of inspiration for our revolutionaries. Shri Shah said that some people suppressed the correct narrative. History is very powerful and it shines like lightning in dark night and it has to be accepted, no one can suppress, vanish and hide the history of freedom struggle of our country. Shri Shah said that many people worked to liberate the country in many ways. He said that in our country, any person, nation and culture have never been separated, they are one and on the basis of this basic idea, the foundation of armed revolution was laid. 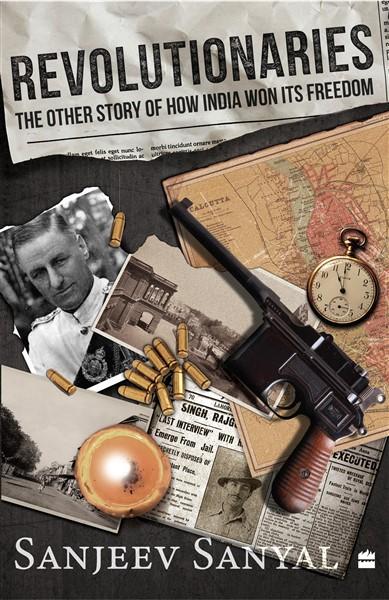 Checkout › Forums › Revolutionaries : The Other Story of How India Won Its Freedom By Sanjeev Sanyal (2023)