European A1 Cow milk is poisonous

Cows producing A2 milk are known as A2 cows while those producing A1 milk are called A1 cows. The β(beta) casein# is located on chromosome 6 of the bovine genome. Production of A1 or A2 milk by cows is governed by beta casein gene which is located on chromosome number 6. Since long back, cows have been producing A2 milk which is regarded as safe and nutritious. Around five thousand years back beta-casein gene was mutated and 67th amino acid was changed from proline (A2 allele) to histidine (A1 allele).

If β contaizns the CCT codon encoding the proline found at the 67th position of the casein chain and when the gene in this locus contains the CAT code encoding the histidine instead of the CCT code from A2 allele, then the A1 allele of the gene is mentioned. Accordingly, individuals with A1A1 geno-type produce A1 milk, in other words histidine occurs at 67th position of β casein. Individuals with A1A2 genotypes produce both A1 milk” that is, milk with “histidine” and β casein, as well as A2, in other words, milk with “proline” and β casein. Briefly, the milk produced by A2A2 genotype animals is called A2 milk namely original milk.

# β-Casein A2-5P (209-amino acid residues, ExPASy entry name and file numbers are CASB_Bovin and P02666, respectively) is the reference protein for the β-casein family, which constitutes up to 35% of the caseins in Cow milk [T. Huppertz, … A.L. Kelly, in Proteins in Food Processing (Second Edition), 2018]

Morphological differences between cattle types producing A1 and A2 milk

A2 Milk Producing Desi Indian Bovin Cow
1. Indian breed of cows have flap of skin beneath their neck.
2. They have hump.
3. Their back is curved, especially near the tail.
4. The ears are large, drooping, with a wide forehead and longer
5. The rear legs are round and convex
A1 Milk Producing European modified/mixed Cow
1. This type of cows do not have flap.
2. They do not have hump.
3. Their back is straight throughout the body.
4. The ears are small and the forehead is narrow and the neck
is short.
5. The rear legs have a straight line
Black-white (Holstein – Friesian), yellow (Brown Swiss), brown (Jersey) and brown – white (Simmental) color culture breeds generally produce A1 milk. A1 milk produces diabetes in Human.

β-casein is a protein with 209 amino acids chain. At its 67 position, the A2 type is a mutant variant which has the amino acid – Proline instead of Histidine, in the natural A1 type.. This variant was developed due to mutation in normal A2 beta-casein gene about 3000 years ago in Europe. Indian desi cows escaped this mutation. The mutation leads to further an enzymic product of the A1 type in the small intestine., A1 casein, unlike A2 type, is prone to digestion by pepsin, leucine aminopeptidase and elastase. A 7 amino acid peptide, called β casomorphin 7 (BCM-7) is released by the proteases. BCM-7 binds to the opioid receptors and causes immunosuppression – leading to type 1 diabetes mellitus (DM1), cardiovascular diseases (CVD), autism, metabolic syndrome, schizophrenia [A.F. Keating, T.J. Smith, R.P. Ross and M.T. Cairns. A note on the evaluation of a beta-casein variant in bovine breeds by allele-specific PCR and relevance to β-casomorphin. Irish Journal of Agricultural and Food Research 47: 99–104, 2008]

Charaka (200 B.C.), describes the following properties of cow milk: “Svadu, sheeta, mridu, snigdha, bahula, shlakshna, pichcchil, guru, manda, and prasanna Dashaguna…” “Cow’s milk has 10 properties: sweet, cold, soft, unctuous, dense, smooth, viscous, heavy, slow and pleasing.” It is said to enhance tissues and immune resistance. Cow milk is constituted of Water – 87%, Carbohydrate (Lactose) – 4.8%, Fat – 4%, Protein (Casein, Whey, Glycoprotein) – 3.4%, Minerals (Ca, K, I) – 0.8%, and Vitamins (A, B2, B12). Casein forms about 80% and whey protein forms about 20% of the total protein content in the milk. Glycoproteins are found in trace fractions. Thus, casein becomes a major source for supply of all essential amino acids (except sulphur-containing amino acids – methionine and cysteine). Based on the DNA sequence, casein is classified into 4 types viz, αS1, αS2, β, κ. Milk contains lactoferrin that is microbicidal. Milk contains lactoferrin that is microbicidal. Cow milk contains all B vitamins and is an interesting source of riboflavin, pantothenic acid, folates, and vitamin B12.

The demand for Indian cattle (A 2 milk) is rising in many countries like Australia, Brazil, Africa, South America and Southeast Asia. A news report titled “Climate change spurs positive for India:Overseas demand for indigenous cattle rises” (dated: Nov. 11, 2014) states that Gir and Ongole cows are economically very profitable. Indian exports of embryos of A2 genotypes is a lucrative business. High-quality semen of Bazilian Gir bulls is imported for artificial insemination and enhancement of the local high milk-yielding breeds. [Henna Hamadani et al, Breeds of cattle and buffalo in India, Available at http://en.engormix.com/MA-dairy-cattle/genetic/articles/breeds-cattle-buffalo-india-t2420/103-p0.htm ]

The status of A1/A2 beta-casein variants in Bos taurus cattle breeds from different countries have been shown the presence of A1 variant in European cattle which has been linked to a range of illness.

Indian Desi Cow and its varieties 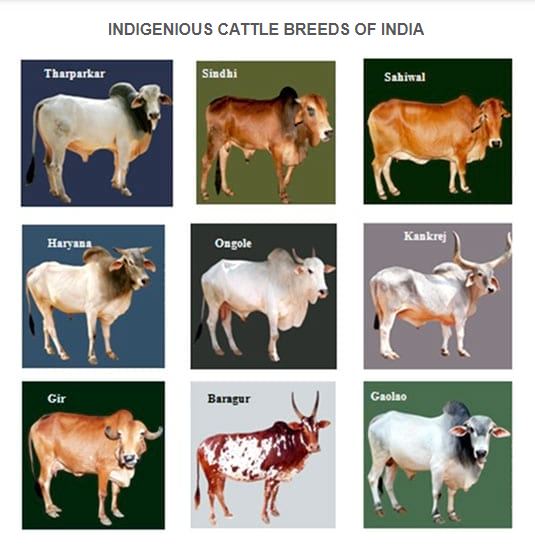 There is a total of 231 breeds of cattle(Cow) in the world out of which 26 are in India. The examples of Indian milch breeds are Sahiwal, Red Sindhi, Gir and Deoni.  [Breeds of cattle and buffalo in India -Published on: 11/13/2012
Author/s : Dr. Henna Hamadani, Dr. Azmat Alam Khan, Dr. M.Tufail Banday and Ambreen Hamadani (Sher-e-Kashmir University of Agricultural Sciences & Technology)]