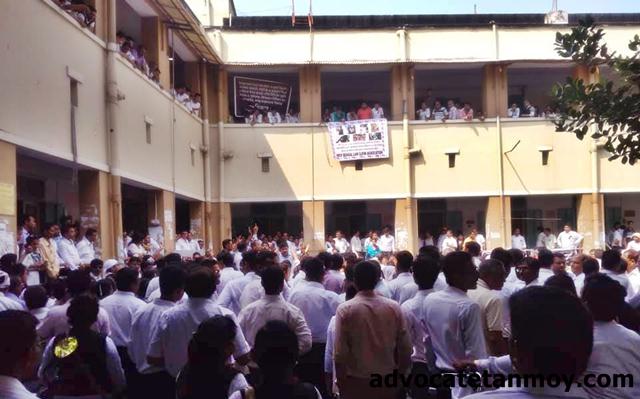 What a District Court is:-

Therefore, the expression District Court always denotes the principal Civil Court of original jurisdiction of a District. All other civil Courts of original jurisdiction, even if presided over by officers of the very same rank and status, will not be treated as District Courts within the meaning of Section 2 (4), if they do not happen to be the principal Civil Court of the district.

If we keep in mind the distinction between the expressions District Court and Judges, it will be clear that the general power of withdrawal and transfer conferred under Section 24 (1) is upon 2 courts namely:-

(i) the High Court and

(ii) the principal Civil Court of original jurisdiction of a district, which satisfies the definition under Section 2 (4).

A careful look at clause (a) of sub-section (3) of section 24 would show that the phrase courts of additional and assistant judges appearing therein, is ejusdem generis with what follows, namely the phrase District court. When clause (a) speaks of the courts of additional and assistant judges with specific reference to the District court, it can be construed only as a reference to the Additional and Assistant District Judges, irrespective of whether the word District is used or not in between the words Additional Judges and Assistant Judges.

Section 3 of the Code reads as follows:

To put it differently, two conditions are to be satisfied for the exercise of the power under Section 24 (1) (a). The first is that the Court to which the case is to be transferred should be subordinate to the Court ordering the transfer. The second is that the transferee Court should also be competent (have jurisdiction) to try and dispose of the same.

FORM OF DRESSES OR ROBES TO BE WORN BY ADVOCATES

Advocates appearing in the Supreme Court, High Courts, Subordinate Courts, Tribunals or Authorities shall wear the following as part of their dress which shall be sober and dignified: –

I. Advocates other than lady Advocates

(a) A black buttoned-up coat, Chapkan, achkan, black sherwani and white bands with Advocates’ Gowns, or

In either case long trousers (white, black striped or grey) or Dhoti.

(a) Black and full or half sleeve jacket or blouse, white collar stiff or soft, with white bands and Advocates’ Gowns.

White blouse, with or without collar, with white bands and with a black open breast coat.

(b) Sarees of long skirts (white or black of any mellow of subdued colour without any print or design) of Flare (white, black or black striped or grey) or Punjabi dress churidar-kurta or salawar-kurta with or without dupatta) white or black:

PROVIDED that the wearing of Advocates’ gowns shall be optional except when appearing in the Supreme Court or in a High Court:

PROVIDED FURTHER that in courts other than the Supreme Court, High Court, District Court, Sessions Court or City Civil Court a black tie may be worn instead of bands.

[Directly accept Put up, Surrender & Bail applications. Other applications through filing Counter- Place it before 11.00 AM ]

8. Court of the Executive Magistrate[ Appeal to Session Judge] [2 Courts]

Complaint against the subordinate judge

Sexual harassment in the workplace

(iii) Other employees of the Small Causes Court, Calcutta or the Civil Courts or Criminal
Courts of Judicial Magistrates and Metropolitan Magistrates

No. of Stenographers to be given to each Judge.

Land & Land Reforms Department is one of the oldest departments of the state as well as of the country.

The principal work of this department is the implementation of various Land  Reforms Acts especially the West  Bengal  Estates  Acquisition  Act, 1953 and the West Bengal Land Reforms Act, 1955.

The activities of this department have tremendous social implications and have an important role in reducing disparities in the socio-economic structure of the agrarian society of this state.

Under the changed scenario, this department has also been one of the keen pins of socio-economic development, industrial growth and modernization on one hand while harnessing indiscriminate changes in land utilization patterns.

The District Land & Land Reforms Officer, having the powers of Collector, heads the Integrated  Set up of Land & Land Reforms Administration in the district. In a district, the entire structure consists of four tiers extended up to Gram panchayet level at the lowest.

The  Establishment  Section deals with all the establishment related matter pertaining to leave, transfer and posting of officers and staff and their service matters & also the function of D.D.O.

The Law cell deals with various court cases relating to LR and appeals under WBLR Act. It also handles vesting and divesting cases.

The technical adviser is the head of the drawing Section which deals with the inking of L.R. maps and despatch of sheets to the W.B.D.O. The Computer  Section deals with computerized land records including all kinds of report and return.

The office maintains numerous  registers  in  terms  of  the Bengal Manual, amongst them are :

Every presiding Judge shall see that execution cases are not neglected or needlessly prolonged, but disposed of with the same care and regularity as original suits. Sufficient time should be allowed for the execution of all processes, warrants and orders issued which shall be drawn up in the execution department in strict rotation except in special cases under written orders of the presiding Judge. Processes and orders ordered to be given dasti to a party or counsel shall be promptly prepared and given out the same day in Court through the Reader.

The Judge shall see that the orders issued by him are carried out: and frequent or habitual carelessness, unpunctuality or procrastination in the execution department should be adequately punished. An order staying execution shall promptly comply. If execution has taken place there shall be no restitution in pursuance of the order of stay.

Office of the Prosecution

The Public Prosecutor conducts criminal cases on behalf of the Government of West Bengal in the session court. The cases handled by the Public Prosecutor are of grave in nature and exclusively trailed by the Session Court. It also appears in the appeals and revision against the order of the lower Courts. At present five advocates are appointed and appearing in the Sessions court for conducting the criminal cases on case wise fees payable on their appearance basis.

Appearance on behalf of :

Name of the Advocate:

NB: Due to emergency the abovenamed Client could not able to sign a formal Vakalat but instructed to appear on his/her behalf. Vakalat Shall be filed by the next hearing.

An Advocate shall not accept a fee less than the fee taxable under the rules when the client is able to pay the same.

An Advocate shall not enter appearance in any case in which there is already a Vakalatnama or memo of appearance filed by an Advocate engaged for a party except with his consent; in case such consent is not produced he shall apply to the Court stating reasons why the said consent should not be produced and he shall appear only after obtaining the permission of the Court.

Bail applications be disposed of normally within one week

Jurisdiction– as defined in the Longman Dictionary of Contemporary English means “The power held by an official or an official body, especially a court of law – the right to use such power.”

“10. Before dealing with the main issue raised in the appeal, namely, the inter se seniority of direct recruits and the promotees, the first and foremost question which requires consideration is whether for calculating the one third quota of direct recruits as provided in Rule 6, the temporary posts of Additional District and Sessions Judges have to be included or not. R.6 only says that of the posts in the cadre of the Service, two thirds shall be filled by promotion and one third by direct recruitment. Cadre is defined in sub-rule (a) of Rule 2 and it means the cadre of the Bihar Superior Judicial Service. It is important to note here that the definition of “cadre”, as given in the aforesaid rule does not say that the temporary posts have not to be taken into consideration or have to be excluded nor there is any indication to that effect. “Cadre” means the entire cadre of the Bihar Superior Judicial Service and, therefore, there is no warrant for excluding the temporary posts.”