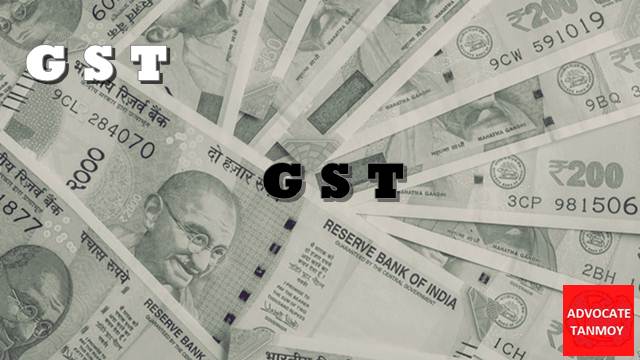 GST is a destination based Tax system. Goods and services tax” means any tax on supply of goods, or services or both except taxes on the supply of the alcoholic liquor for human consumption.“Goods” means every kind of movable property other than money and securities but includes actionable claim, growing crops, grass and things attached to or forming part of the land which are agreed to be severed before supply or under a contract of supply.“Services” means anything other than goods, money and securities but includes activities relating to the use of money or its conversion by cash or by any other mode, from one form, currency or denomination, to another form, currency or denomination for which a separate consideration is charged.

The following persons shall not be liable to registration, namely:––

(a) any person engaged exclusively in the business of supplying goods or services or both that are not liable to tax or wholly exempt from tax under this Act or under the Integrated Goods and Services Tax Act;
(b) an agriculturist, to the extent of supply of produce out of cultivation of land.

A registered person supplying taxable goods shall, before or at the time of,—
(a) removal of goods for supply to the recipient, where the supply involves movement of goods; or
(b) delivery of goods or making available thereof to the recipient, in any other case,
issue a tax invoice showing the description, quantity and value of goods, the tax charged thereon and such other particulars as may be prescribed.

Tax Return : Every registered person, other than an Input Service Distributor, a nonresident taxable person and a person paying tax under the provisions of section 10 or section 51 or section 52, shall furnish, electronically, in such form and manner as may be prescribed, the details of outward supplies of goods or services or both effected during a tax period on or before the tenth day of the month succeeding the said tax period and such details shall be communicated to the recipient of the said supplies within such time and in such manner as may be prescribed.

Tax Payment : Every deposit made towards tax, interest, penalty, fee or any other amount by a person by internet banking or by using credit or debit cards or National Electronic Fund Transfer[NEFT] or Real Time Gross Settlement or by such other mode and subject to such conditions and restrictions as may be prescribed, shall be credited to the electronic cash ledger of such person to be maintained in such manner as may be prescribed

Tax Refund: Any person claiming refund of any tax and interest, if any, paid on such tax or any other amount paid by him, may make an application before the expiry of two  years from the relevant date in such form and manner as may be prescribed.

Tax Assessment: Every registered person shall self-assess the taxes payable under this Act and furnish a return for each tax period as specified under section 39.

Tax Audit:  The Commissioner or any officer authorised by him, by way of a general or a specific order, may undertake audit of any registered person for such period, at such frequency and in such manner as may be prescribed.

The rates have been classified in seven groups as below

GSTN is a special purpose vehicle (SPV) formed by Ministry of Finance to provide common IT infrastructure, systems and services to the Central and State Governments, tax payers and other stakeholders for supporting implementation and administration of the GST in India.It was incorporated on March 28, 2013. The Government of India holds 24.5% equity in GSTN and all States of the Indian Union, including NCT of Delhi and Puducherry, and the Empowered Committee of State Finance Ministers (EC), together hold another 24.5%. Balance 51% equity is with non-Government financial institutions.

For registration and tax payment

The Goods and Services Tax Council shall consist of the following members,
namely:—
(a) the Union Finance Minister…………………… Chairperson;
(b) the Union Minister of State in charge of Revenue or
Finance…………….. Member;
(c) the Minister in charge of Finance or Taxation or any other Minister
nominated by each State Government………………..Members.

he shall be liable to pay a penalty of ten thousand rupees or an amount equivalent to the tax evaded or the tax not deducted under section 51 or short deducted or deducted but not paid to the Government or tax not collected under section 52 or short collected or collected but not paid to the Government or input tax credit availed of or passed on or distributed irregularly, or the refund claimed fraudulently, whichever is higher.