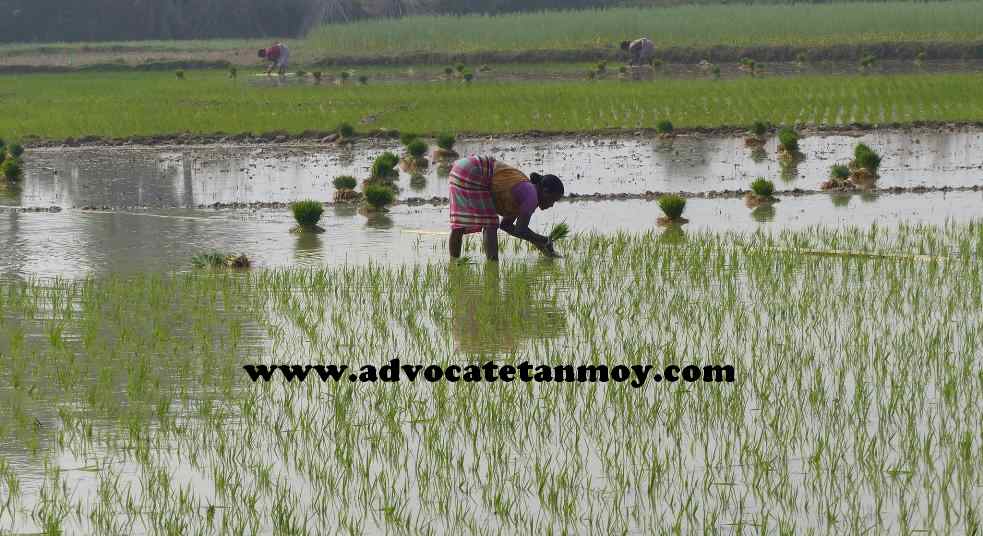 Agricultural land in India was administered under three systems of which Zamindari system covered nearly 57 percent of total area extending over nine provinces including Bengal, Bihar, Eastern U.P., North Madras and parts of Assam and Orissa. The Mahalwari system, which covered 5 percent of the total area and the Ryotwari system, which covered about 38 percent of the total area also generated unprotected tenants, sub tenants and share croppers, who did not have any tenurial security over the land they cultivated.

In the Zamindari system, the land revenue was collected from the farmers by the Zamindars. The system was created by the East India Company when in 1793 Lord Cornwallis entered into “Permanent Settlement” with landlords with a view to increasing the revenue of the company. The status of a zamindar is intermediary. The number of intermediaries between the government and the actual cultivator was multiple in number. According to the Simon Commission Report (1928) in some cases there were as many as 50 intermediaries.

The cultivator under Rayatwari system deals directly with the government. He takes land from it and pays to it land revenue. No intermediary, therefore, stands between the tiller and the government as under the Zamindari system. So long as he regularly pays land revenue, he continues to hold the land and cannot be evicted. He has even the right to sell the land. Since the ownership of land vests with the government, he has simply the right of occupancy. It is for this reason that he is known as an occupancy tenant.The system is to be found largely in Maharastra, Gujarat, Assam, Tamil Nadu, and Madhya Pradesh.

In Mahalwari system land is held under the joint ownership of the entire village community. The members of the community jointly and individually are responsibly for the payment of land revenue to the government. Generally, the village community appoints a certain person for this purpose.This system is prevalent in Punjab, U.P. and in some places of Madhya Pradesh.

After independence, first attempt at Land Reforms in the Country began with the abolition of intermediaries and bringing the tenant into direct contact with the State under the ryotwari tenure. Following State enactments made towards this end.

After expropriatory legislation, next step taken in the field of Land Reforms is protection of tenants by means of the enactments mentioned below :

The most important step in the field of Land Reforms taken in the State was to impose a ceiling on agricultural land holdings. The A.P. Land Reforms (Ceiling on Agricultural Holdings) Act 1973, enacted for this purpose can be said to be culmination of land reforms in the State

The Tamil Nadu Land Reforms (Fixation of Ceiling on Land) Act, 1961 (Tamil Nadu Act 58/61) was enacted with a view to reduce the disparity in the ownership of the agricultural land and concentration of such land with certain persons and to distribute such land among the landless poor.

BOARD OF REVENUE UTTAR PRADESH

The Zamindari system in Uttar Pradesh developed along with Bengal’s. The system started with the appointment of Mansaram and his relatives in 1738  and Uttar Pradesh got credit of becoming first in enacting Land Reforms Act, “Uttar Pradesh Zamindar Abolition Land Reforms (UPZA&LR) Act, 1950.

(1) The act abolished all intermediaries.

(2) The rights of intermediaries were acquired on payment of compensation at eight times of their net assets.

(3) Rehabilitation grant provided for smaller Zamindars (who paid up to Rs. 10,000 land revenue annually to the Govt.) or a graded scale of 2 to 20 times of the net assets, being largest for low incomes and smallest for those comparatively large incomes.

(4) The tenant was entitled to ownership on payment of 10 times their rent and henceforth called ‘BHUMIDHAR’ who will pay at land revenue 50% of his existing rent. (5) Land was settled with the cultivator ‘Sir’ and ‘Khud Kasht’ and grove land could be retained in the name of personal cultivation. Hired labour is also included in the definition of personal cultivation. In such land, the Zamindar becomes “BHUMIDAR”

(6) Before the act, there were intermediaries. Now a system of temire with four classes of tenants was established, two major (BHUMIDHAR & SIRDAR) and two minor (ASAMIS AND ADIVASIS). Government was to acquire Zamindari right in all property not covered under the head of personal cultivation. In 1954, the class of Adivasi was abolished and converted to Sirdar. On 08/01/1977 tenancy changed to just 3 classesSankramanie Bhumidhar with transferable rights. Asankramanie Bhumidhar with nontransferable rights and Assami (Non-heritable and Non-transferable). Tenants were redefined as Sirdars with permanent heritable (but not saleable) rights in their holding and can become Bhumidhars (with saleable rights) on payment of 10 times of the annual rent.

(7) Prohibition of letting and subletting of land.

(8) Prohibition of accumulation of land beyond 12 l/2acre in U P applicable to the entire family- spouse, minor sons and minor daughters (later amendment), the act tried to prevent fragmentation of land. In consolidated areas, no person could transfer fragments except in cases where the purchaser’s land is contiguous.

(9) This act created a uniform rule of succession, irrespective of personal laws.

(10) Creation of village Republics – the Land Management Committee (LMC), the executive body of the gram sabha is responsible for development of village lands.

(11) The weaker sections of the society have been given protection- no scheduled caste is permitted to transfer his land to non- scheduled caste, unless the collector’s permission is sought. If after selling land the remaining holding of an SC would be less than 3.125 acre, then permission is refused. For Scheduled Tribes, the collector cannot give permission at all. Under Sec-178, a criminal proceeding can be instituted against the person who has illegally grabbed the land of SC and ST.