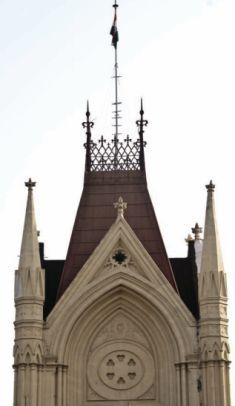 Rules of High Court at Calcutta relating to Designating Senior Advocates under Section 16(2) of the Advocates Act, 1961

Notification No. 3181-G, dated, Calcutta the 5th May, 1997. – In exercise of the powers conferred upon the High Court under Section 16(2) of the Advocates Act the Hon’ble High Court at Calcutta frame the following Rules which will come into effect from the date of its publication in Calcutta Gazette Extraordinary.

1. Only such Advocates shall be designated as Senior Advocates, who, by virtue of their ability, integrity, standing at the Bar, experience, or special knowledge of law are deserving of such distinction.

2. (a). No person shall be designated as a Senior Advocate unless he has attained the age of 40 years and has put in practice of more than 15 years at the Bar, or has a combined experience of more than 15 years as a member of any State Judicial Service and practice at the Bar, of which not less than seven years’ practice should be after his cessation as a member of the Judicial Service.

(b). Every former Judge of a High Court, entitled to practise in this Court shall be designated as a Senior Advocate, if he intimates to the Chief Justice such desire in writing.

3. The Chief Justice shall constitute a standing Special Committee comprising of 7 Judges of the Court for considering the names of Advocates for being designated as Senior Advocates.

4. Any Judge of the Court may recommend to the Chief Justice the name of an Advocate for being designated as a Senior Advocate. On receipt of such recommendation, the Registrar, Appellate Side or the Original Side, shall obtain from the person recommended the information and consent in writing as per proforma appended to these norms. The recommendation of the Judge along with the information-cum-consent sheet shall be placed before the Special Committee for its consideration. The Special Committee shall take up all proposals for consideration in its meetings which shall be held at least twice in every year, generally in the months of January-February and June-July each year.

5. The proposals/recommendations of the Special Committee in respect of all names considered by it shall be placed in the meeting of the Full Court. Upon consideration, the Full Court will take a final decision by simple majority through secret ballot upon such proposal/ recommendations, with such modifications and variations as may be deemed appropriate. Upon a decision being taken by the Full Court, the persons approved shall stand designated as Senior Advocates in terms of section 16(2) of the Advocates Act and a notification to this effect will be issued and got published by the Registrar, Appellate Side.

6. The Special Committee while considering the proposal shall have due regard to the information supplied by the Advocate, particularly with reference to his income, number of briefs handled in the past, nature of his work and experience etc.

7. Once rejected, the case of an Advocate shall not be considered for designation as Senior Advocates for a period of two years from the date of such rejection.

8. The Special Committee or the Full Court shall not be required to record reason for its decisions.

9. If the High Court has reason to believe that a Senior Advocate has deported himself in a manner unbecoming of a Senior Advocate, it may, in appropriate cases, withdraw such designation after giving the concerned Advocate an opportunity of making representation.

Proforma of Bio-Data And Consent

1. Name
2. Father’s/Husband’s name
3. Address
4. Date of Birth
5. Date of Enrolment as an Advocate
6. If a former member of the State Judicial Service, length of such service and the experience at the Bar.
7. Fields of speciality in branches of law.
8. Whether he/she has been a chamber junior to any lawyer, if so, name of such lawyer and the period of juniorship.
9. Whether any junior lawyers are/have been attached to his/ her chambers. If so, their names and the periods of their juniorship?
10. Whether an assessee under the Income Tax Act. If so professional income particulars as reflected in the Tax Returns filed in the past 5 years.
11. Whether in any panel of Central/State Government or other institutions. If so, details thereof.
12. Whether any cases in which he/she appeared have been reported in any journal. If so, details thereof.
13. Details of important matters in which he/she appeared.
14. Number of briefs received/handled every year in the past three years.
15. Any other information which the leaned Advocate may like to furnish.

Note : Separate sheet can be used for providing answers to the aforesaid questions, if the space in this proforma is considered insufficient.

I, ……………………………..Advocate do hereby consent to be designated as a Senior Advocate in terms of Section 16(2) of the Advocates Act, 1961 and agree and undertake to abide by all laws, rules, regulations, norms and guidelines as are in force for the time being, or which may be prescribed hereafter for this purpose.