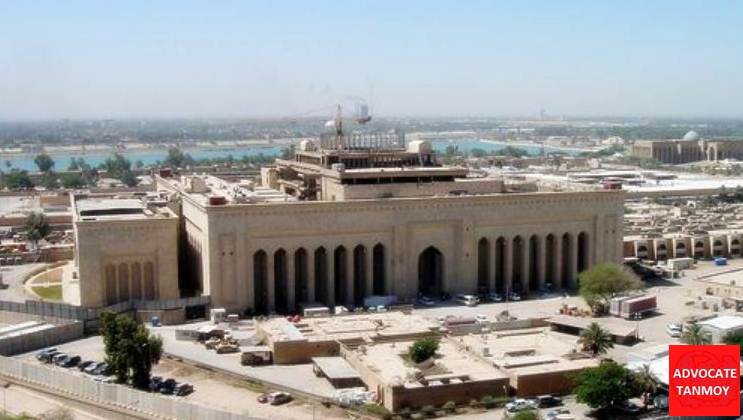 REFERENCE: serious crimes committed between 1968 and 2003.

Governing Council, reflecting the general concerns and interests of the Iraqi people, has expressed a desire to establish a Special Tribunal to try members of the Ba`athist regime accused of atrocities and war crimes. The Governing Council is hereby authorized to establish an Iraqi Special Tribunal (the “Tribunal”) to try Iraqi nationals or residents of Iraq accused of genocide, crimes against humanity, war crimes or violations of certain Iraqi laws, by promulgating a statute, the proposed provisions of which have been discussed extensively between the Governing Council and the CPA and are set forth.

A Tribunal is hereby established and shall be known as The Supreme Iraqi Criminal Tribunal (the “Tribunal”). The Tribunal shall enjoy complete independence. The Tribunal shall have jurisdiction over every natural person, whether Iraqi or non-Iraqi resident of Iraq, accused of committing any of the crimes listed in Articles 11, 12, 13 and 14 of this law, committed during the period from 17 July 1968 to 1 May 2003, in the Republic of Iraq or elsewhere, including the following crimes:
A. Genocide;
B. Crimes against humanity;
C. War crimes; and
D. Violations of Iraqi laws listed in Article 14 of this law.

Investigative judges, Trial Chamber judges, members of the Prosecutions Department, Director of the Administration Department and Tribunal personnel shall be Iraqi nationals, taking into account Article 4 (Third) of this Law.

The Tribunal shall have jurisdiction over any Iraqi national or resident of Iraq accused of the crimes listed in Articles 11 to 14 below, committed since July 17, 1968 and up until and including May 1, 2003, in the territory of the Republic of Iraq or elsewhere, including crimes committed in connection with Iraq’s wars against the Islamic Republic of Iran and the State of Kuwait. This includes jurisdiction over crimes listed in Articles 12 and 13 committed against the people of Iraq (including its Arabs, Kurds, Turcomans, Assyrians and other ethnic groups, and its Shi’ites and Sunnis) whether or not committed in armed conflict. The Tribunal shall only have jurisdiction over natural persons.

The Tribunal shall have its seat in the City of Baghdad, or, following a written proposal made by the President of the Tribunal, in any other Governorate in Iraq as determined by the Governing Council or the Successor Government.

Upon a determination that a prima facie case exists, the Investigative Judge shall prepare an indictment containing a concise statement of the facts and the crime with which the accused is charged under the Law, and shall refer the case to the Trial Chamber.

A person against whom an indictment has been issued shall be taken into custody, pursuant to an arrest order or warrant issued by the Tribunal Investigative Judge, and shall be immediately informed of the charges against him and transferred to the Tribunal,

The Trial Chamber shall pronounce judgments and impose sentences and penalties on persons convicted of crimes within the jurisdiction of the Court. The convicted person or the Prosecutor may contest the verdicts and decisions
by appealing in cassation to the Appeals Chamber on the following grounds:
a. If the verdict is in contradiction with the law or there is an error in interpreting it.
b. An error of procedure.
c. An error of material fact which has occasioned a miscarriage of justice.

Sentences shall be carried out in accordance with the law. No authority, including the President of the Republic, may grant a pardon or reduce the penalties issued by this Tribunal. Penalties shall be enforceable within thirty days of the sentence or decision reaching finality.